A name is a designated word or words prearranged to mean a specific person or thing. (No, I didn’t look in a dictionary for that definition. Maybe I should have.) In regards to people, names are very important, because names are a personal aspect in their lives.

For many people, it’s their identity. It’s very natural for someone to say, “I am Bob.” as opposed to, “Bob is my designation in the mouth sounds of the speaking human populace.”

Why would calling someone by their last name be considered rude?

To the recipient, it negates their individuality and lumps them together with everyone who shares that last name. This means their siblings, parents, children, and grandparents – people who they are related to, but who are obviously very different. And some last names are shared by people who aren’t relatives, which broadens the field of people who are not being addressed. It’s understandable then, that names are taken seriously.

Names at their surface value represent a person in a significant way. And yet, people will not find their first name generic or overly inclusive of unrelated parties. Why is that?

“Hi, I’m Bob. There are thousands of other Bobs in world, and only a handful of Swansons out there, but please, call me Bob.”

It’s almost as if people put more stock in the distinction between them and their own families than the whole wide world. First names say: “I’m me and I’m different.” Different from what? From whom? It’s more of a push from those that are similar than those who are different. 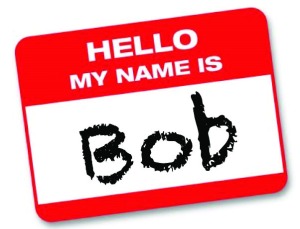 Most people don’t want to be all that different from society. Some may want to appear different, possibly for the sake of fitting into another society of like-minded people. But nobody truly wants to be alone. They just want to be themselves. For many people, the first way to discover their own identity is to break away from their family’s identity. They’re not throwing their family under a bus, so much as they are trying to stand out a little more as an individual.

For these people (as with most), their name could be their identity. Not their last name. Their first name. Even if there are ten million Bobs.

Bob doesn’t need to be different from those other Bobs. He knows that he is already. He values his difference from his own family. No matter what his relationship with his family is, he is not strictly defined by them.

However, it’s much easier to define other people by their last name. But that’s a whole other story.

Why is this blog called what it is? I have no idea. This blog isn’t a person. It’s a blog. It doesn’t strive for individuality the way people do. It can be what it can be, without too much emphasis on the name. Who knows? Maybe the significance will become clear over time. For now, sit back and enjoy the ride. Let’s see where this train goes.