“Excuse me, is the train station around here?” I tried to keep the desperation out of my voice. It was hard though. Not knowing where the busiest transit center in the city was put me in the category of Very Truly Lost. I might as well have held a sign that said, “Mug me.” There were only twenty minutes left until boarding, but the sky was turning dark, with sinister sunset colors streaked across the sky, preying on my mind like a bad trip.

The old woman who I asked looked about ninety, and smelled it too, but I figured she was my safest bet for directions. She opened her mouth to answer and I saw two rows of impossibly sharp and pointy teeth. She grabbed my arm and said, “Lost, are we? Don’t know where we’re going?” Loudly, in my ear. I recoiled.

The shock must have showed on my face, because she suddenly leaned her head back and laughed. It was a harsh grating sound, and her teeth sparkled in the lamplight. I stood frozen, my heart pounding until she was interrupted by a fit of thick coughing. From the derelict buildings on the left of me, two men were approaching. Maybe alerted to the noise.

I found my feet and made my way toward the throng of people on the cobblestone street, hoping to lose myself in the crowd. My heart was thumping dramatically in my chest, and I couldn’t find the air in each breath to calm down. I didn’t dare turn back, but I knew I was being followed. I could feel the presence of those two men, could see the swagger in their step without looking in their direction. And I could still sense that old woman, out in the comer of my mind, rubbing her hands together and salivating at the thought of my demise. I was walking quickly now, without any regard for where I was going, as long as it was away.

But the streets were crowded, and I was jostled numerous times by other pedestrians. Then I noticed that it was happening too often for it to be a mistake every time, or blamed on a rush hour of some sort. I was being pushed on purpose, by tall men and short busty women, lanky teens who hadn’t seen a proper meal since infancy, and old folk with gnarled canes crafted of trees from another age.

I started running, but they were closing in on me, and I stumbled. Pain in my knee, but I didn’t dare cry out. I started to get back up, but I I felt pressure on my shoulder, forcing me down. I rolled over to see them crowded around me, all sadistic smiles and flashing eyes, on the brink of terrible laughter that was still in check. “What do you want from me!” I yelled. “Get away! Leave me alone!” The crowd parted to reveal the same old woman. She said, “Oh, but you are alone. You’ve been alone for years. Where are you running from? Who is waiting for you when you get off that train?” There was a pause – “Nobody; yourself. You will never find what you’re looking for if you keep running from it.” And behind her, the two men stood at attention, reeking of tobacco and malice. “No!” I said softly. And I could hear my doom approaching steadily with every step they took towards me. I tried to run, but the throng of demons held me back. The two men produced two matching clubs from nowhere and held them high above my head. The old woman cackled and the crowd joined in, singing the orchestra of the damned. The last thing I heard was a train whistle blowing; somewhere it was loud and clear and piercing, but to my ears it sounded faint and weak and far too late. Then my vision was darkened forever. 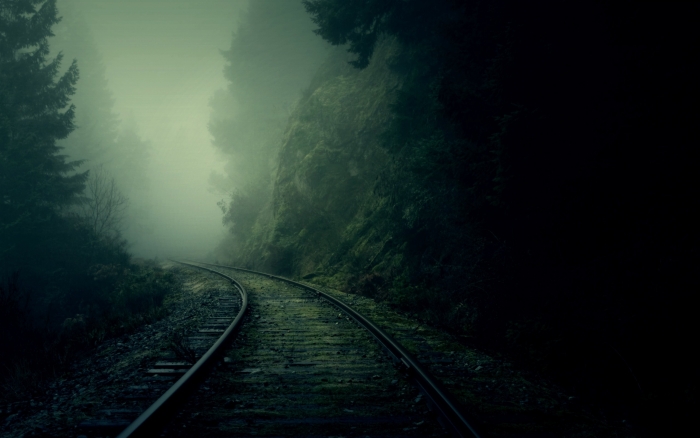 The crowd parted to reveal the same old woman. She said, “Oh, but you are alone. You’ve been alone for years. Where are you running from? Who is waiting for you when you get off that train?” There was a pause – “Nobody; yourself. You will never find what you’re looking for if you keep running from it.” And with that, she turned on her ancient heel and walked away, the two men in tow. As if by some prearranged signal, the crowd dispersed until only I remained, alone and panting on the dusty cobblestones.

Then the shock wore off. I scrambled to my feet and looked around wildly, trying to spot a hint of train tracks. There, up ahead to the right: the train station. I ran with all speed, not looking back. I had barely arrived before I heard the chugging of an approaching train. I heard the train’s whistle, loud and clear and piercing in my ears, the most welcome sound in the world. When the train stopped, I got on board, settling comfortably in my seat. Before long we began to move slowly from the station, gradually picking up speed. I glanced out the window, just for a second. I saw the winding streets, the dilapidated buildings, now a blur to the eye. I saw where I had lain minutes ago, helpless and without a hope. I looked away. Now I was moving on, away from all the pain and struggle; forward, to a future that didn’t include my past.